It seemed like all you could see was glitter and diamonds at the Moulin Rouge themed New Years Eve Bash in one of the most highly regarded private clubs, the Mar-a-Lago in Palm Beach, FL. Owner, Donald Trump kicked off 2014 by offering unforgettable entertainment to his guests. Sophisticated fun, fine food, an amazing show,and electrifying music from DJ Sire and DJ Marc Vane set the stage for greeting 2014 in luxury and style. The party was attended by many A-listers such as international rockstar Rod Stewart, New England Patriots owner Robert Kraft, and many more… The whole Trump clan was there, including Ivanka Trump with her husband Jared Kushner, Don Trump Jr. with his wife Vanessa Haydon, and Eric Trump. It was an unforgettable night in Palm Beach for New Years Eve, the giant screens dropped at Midnight and the crowd went absolutely insane as confetti flew everywhere and the midnight kisses were everywhere. The party went on until the early morning hours!!! We only look forward to what surprises Donald Trump will have for the next NYE party at the Mar-a-Lago Private Club!
Happy New Year!!! 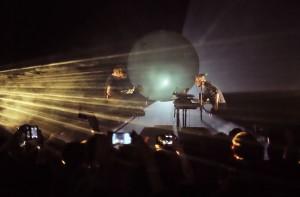 While art dominates Miami during Art Basel week for obvious reasons, it is also becoming one of the most exciting times to catch live performances all year. Music and art collided at Mana Wynwood during Art Basel 2013. DJPeoples, Flaunt Magazine, 3P Production; the team behind the III Points Music Festival, and Mana Wynwood; the largest multipurpose production studio located in Miami’s Wynwood Arts District, played host and provided production to a 4 night  concert series. The week kicked off with a private performance by superstar rap artist Kendrick Lamar and an eye catching mural project titled Shoot for the Moon. The one of a kind soundstage was transformed into an indoor garden oasis fittingly called the Sound Garden. Darkside, the collaborative duo of electronic producer Nicolas Jaar and guitarist Dave Harrington premiered their debut album, “Psychic” while a breath taking installation from Children of the Lights displayed. The event was booming with incredible art and music, including the one and only Boy George who played his first live performance in 10 years. The larger than life Mana Wynwood location was the perfect back drop for the out of this world event. The week ended with an all day party from the famous team of Fools Gold with performances from A Track and Miami’s own Trick Daddy. Every night was a new experience with heavy hitting stages, sublime light effects, amazing sound, and extraordinary art installations. 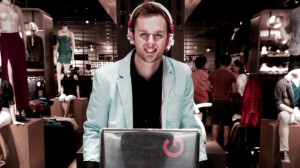 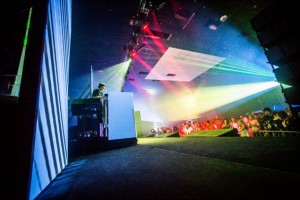 The III Points Festival held 30 events in 3 days blending music, art and technology through a series of live performances, lectures, film screenings, art exhibits, interactive games and open hours for local galleries all located in the walk-able and always entertaining community of Wynwood. During the day the entire Wynwood community was involved in one way shape or form (literally). Proudly, DJPeoples provided all the production, sound and lighting for the 2 day concert main event, the DFA BBQ w/Yacht Live, the Young Turks BBQ at Cafeina, Wynwood Café’s Slap and Tickle, events at Butchershop and all of Samsung’s production requests for the Galaxy Gallery. END_OF_DOCUMENT_TOKEN_TO_BE_REPLACED 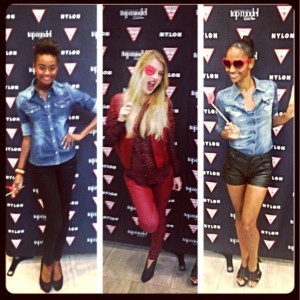 GUESS along with NYLON Magazine put on an amazing event to celebrate GUESS’ partnership with America’s Next Top Model. The GUESS store in the heart of South Beach FL on Lincoln Rd. was a buzz with models and beautiful people. Party goers shopped fierce styles strait from Americas Next Top Model Season 20. Special Guests stunning cast members; Laura Kirkpatrick from season 7, Stacy Ann from Season 10, and from this season 20 Renee Bhagwandeen, snapped pictures on the red carpet and greeted the Miami fans.  Everyone enjoyed sips, sweets, and mini-makeovers by NYX Cosmetics, scratch-to-reveal offers and more! DJ UnoMas aka Marcos Casassa was playing the hottest tracks and getting everyone dancing at this exciting event. 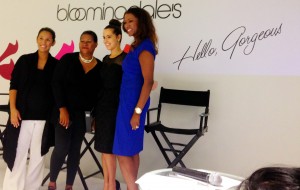 Beauty addicts converged in the Bloomingdale’s Aventura Mall during the morning hours before the store doors opened. The luxury department store held the first ever Florida Makeup Date Event. 500 women were treated for a day of beauty along with champagne breakfast and freebies galore. Shoppers got makeovers and tips from professional makeup artists who work for some of the biggest stars in Hollywood. Guests also received swag bags with sample products featuring the hottest beauty items. NBC’s Trina Robinson hosted the live show along with music from DJ Marc Vane. 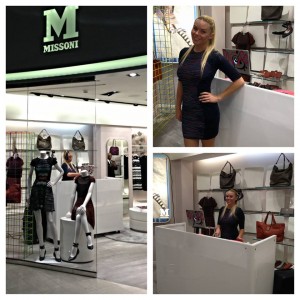 One of the world’s hottest brands Missoni has diversified and offers a less expensive line of luxury clothing; M for Missoni. The fashion forward brand has opened 6 new locations and one of the biggest is in The Forum Shops in Caesar’s Palace , Las Vegas. DJPeoples was so excited to be a part of the grand opening! Fashionistas listened to beats by the beautiful DJ Vital and DJ CC along with the sounds of the “M Missoni is for Music” Summer Mix CD in collaboration with Epic Records. Guests also enjoyed mini “Baked by Melissa” cupcakes flown specially in from NYC and sipped on sparkling libations. 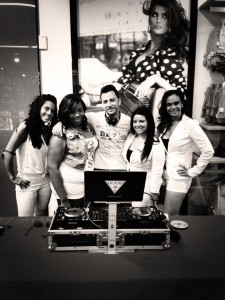 G by Guess and Guess Factory launched their Sexy Summer Sale this Fourth of July Weekend and DJPeoples was happy to provide the soundtrack. Our DJ’s were in full effect as shoppers scored up to 50% off this summer’s hottest styles.  From Houston to Niagara Falls our talented DJ’s made the hot summer weekend a little cooler! 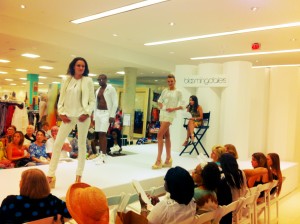 Bloomingdale’s Aventura kicked off the summer with a high class bang at this year’s Summer Solstice Fashion Show. The event was hosted by the very beautiful fashion blogger and creator of Kelly’s Kloset, Kelly Saks, who shared all her fashion do’s and don’ts for the season. Guests enjoyed eats, beats and endless summer fashion inspirations. Models strutted the runway in brands like BCBG, Marc Jacobs, Alice & Olivia, Versace Collection, and many more as DJ Peoples’ very own Marc Vane was setting the mood with hot tracks and sexy sounds.

Check out more pics from this event and Kelly Saks’s trending fashions at :
www.kellysklosetblog.com